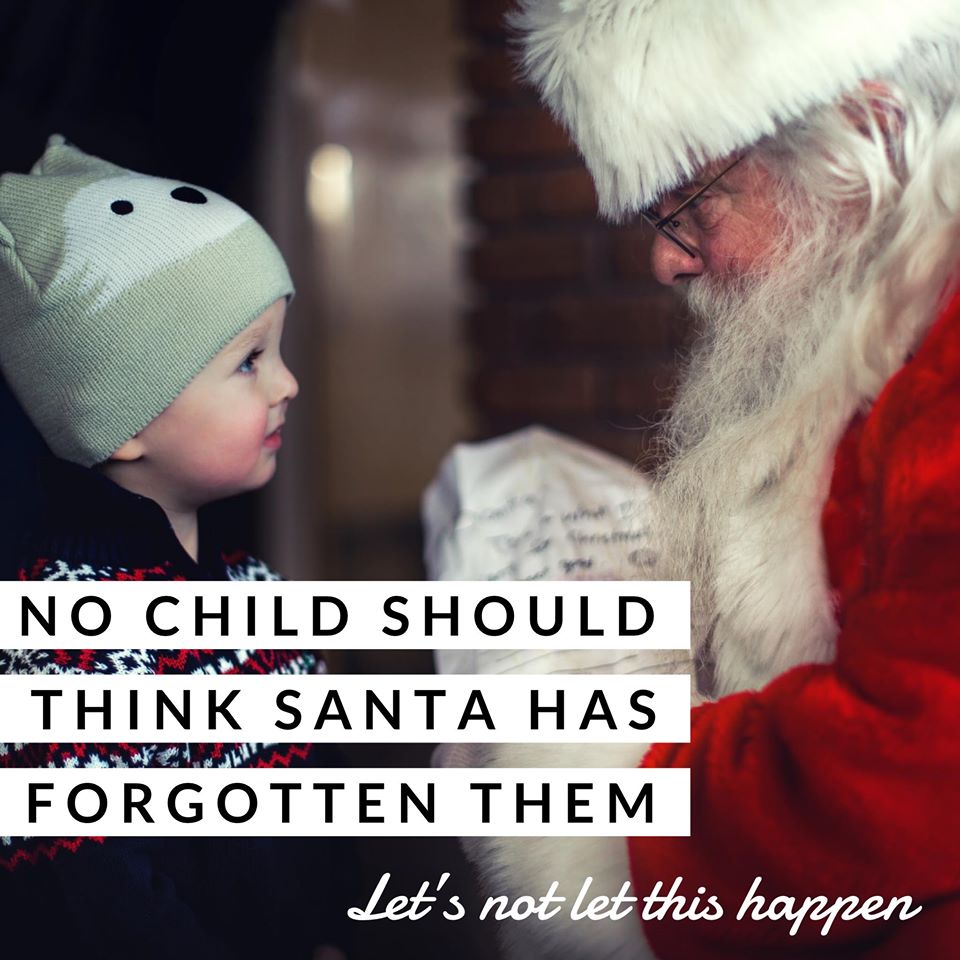 Dudley CVS which is a registered charity, has run its Operation Santa appeal for over 40 years and in 2019 was proud once again to work together to connect, collaborate and build partnerships with individuals, organisations, groups and businesses across Dudley borough, and beyond! It was been another whirlwind of activity with 12994 donations and some amazing support, and goodwill along the way.  It’s truly been another phenomenal effort with more support than ever from kind-hearted individuals, groups, societies, statutory partners and businesses. Unfortunately there was also an 86% increase in requests for support!

Who do we support?

We try to provide a main present for children and young people who would otherwise receive nothing for Christmas.  This year we received 95 requests for support, with a maximum limit per request of 25 children, from schools, social workers, children’s services, children’s centres, other statutory partners, voluntary, community and faith sector groups.  There were also requests for grotto presents or presents for Christmas parties, which we did our best to fulfil.

Our wonderful team of committed elves were busier than ever. Thanks to Trev, Rose, Jayne, Steve, Sarah and Phil for their time and support. These lovely people are all volunteers who give their time around already busy lives. 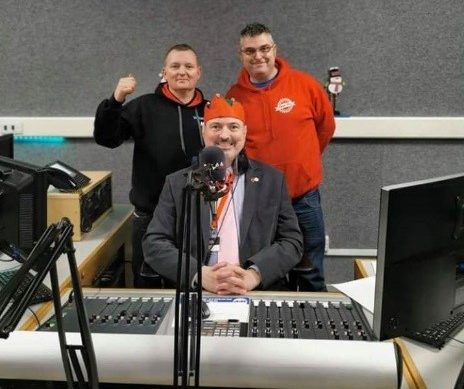 This year we were blessed to be offered a superb location for our grotto with Black Country Radio at their studio in Brierley Hill and the whole team really went the extra mile to support us.  They produced a special advert which they ran throughout November and December, invited us along to their shows to share our progress and challenges, and even added a special section on their website, with links and a contact form. They secured wonderful press coverage for our launch on 7th November, including the Express & Star reporter, photographer and also Radio WM, helping us raise our profile and even ran a special programme where our launch guests such as the Hope Centre, Top Church Training, Volks Magic and VDubz were interviewed live on air. [Here are Lee Southerton from Volks Magic and Garry Aulton from Beerbuz/VDubz in the Valley with Clive Payne from Black Country Radio at the launch] 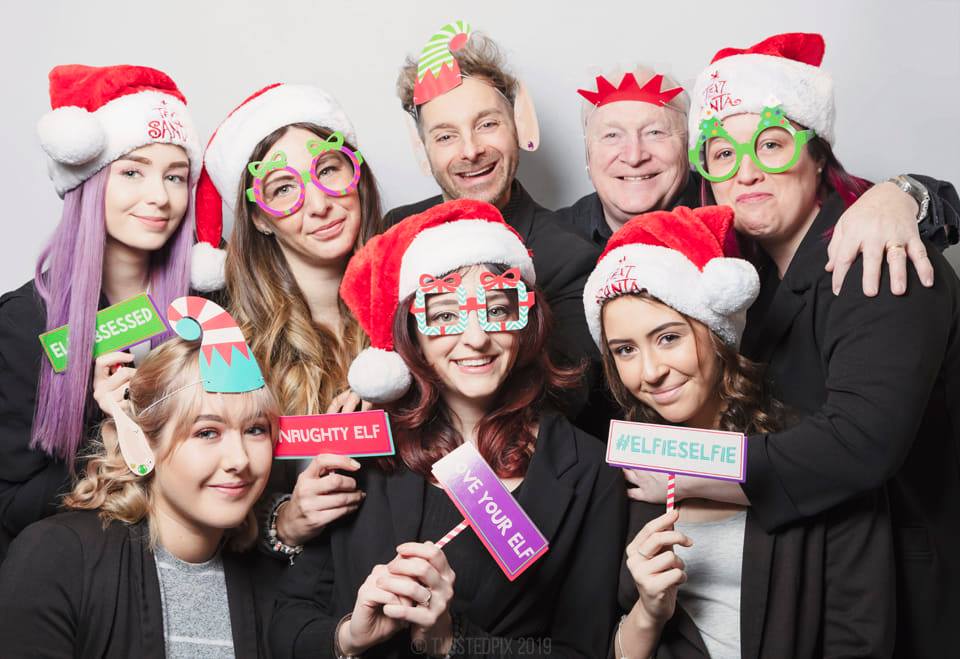 Brett Harris and his angels from Blaze Hair

Our committed Business Ambassadors were once again on a mission to generate as many donations as possible and achieved an amazing 2250 donations this year. They reached out to their network of supporters and helpers, including a fabulous donation of hundreds of brand new books from All Saints Church, Claverley.

Santa’s a Gangster and Volks Magic

We were very fortunate to have Lee Southerton and his ‘Santa’s a Gangster’ supporters join us in 2017 and their ongoing support is invaluable to our appeal each year.  This year they raised a phenomenal £12010.66 from their supporters and the VW Beetle Cabriolet Prize Draw.  This meant we were able to keep the grotto topped up with presents for children and young people who may otherwise think that Santa had forgotten them. A number of the supporters attended our appeal launch event in November. [ß Lee Southerton from Volks Magic with the Mayor of Dudley, Cllr David Stanley at our launch event]

Lee’s friend Jim Cousins, who was a keen supporter, passed away in early November and those attending his wake were asked to bring toys and gifts along to his final cruise, with over 300 presents delivered to the grotto directly afterwards .

This year these supporters generated an amazing 3022 donations in addition to their fundraising efforts!

Garry and Hayley Aulton who run Beerbuz and organise an annual VW gathering called VDubz in the Valley raised a phenomenal £3500 at the event’s charity auction in September to add to the Santa’s a Gangster appeal.  They attended the launch and were able to share photos of the gifts which were purchased with the money they raised. Garry and Hayley were recognised with a special award at Dudley Volunteer Awards 2019.

We were lucky that the wonderful team of Jason, Carl, Mike and Simon were back to support us again this year, with a huge toy shop and funding another Christmas party with entertainment, hot Christmas dinner and a present from Santa at DY1 Venue. There was a magical grotto for Santa to sit in and the children had a wonderful afternoon as always.  The guys were also recognised with special 20 year long service certificates at Dudley Volunteer Awards 2019.

Chris, Paul and Paula generously offered 100 free Christmas carveries for local kids again this year, despite the fact that the pub had been sold and they had to cease trading on 17th December immediately after our second Christmas carvery party. Paul again played Santa and gave every child a present. Their generosity was also recognised with a special award at our Dudley Volunteer Awards in 2019. 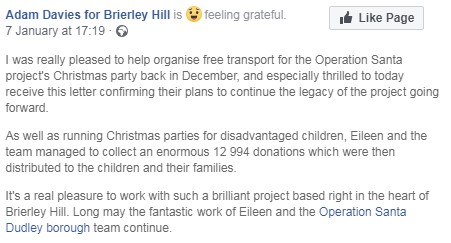 We were fortunate to secure free coaches again to transport the children to the Court House for their lunch this year and Adam Davies from Merry Hill Private Hire said why he was delighted to support Operation Santa. 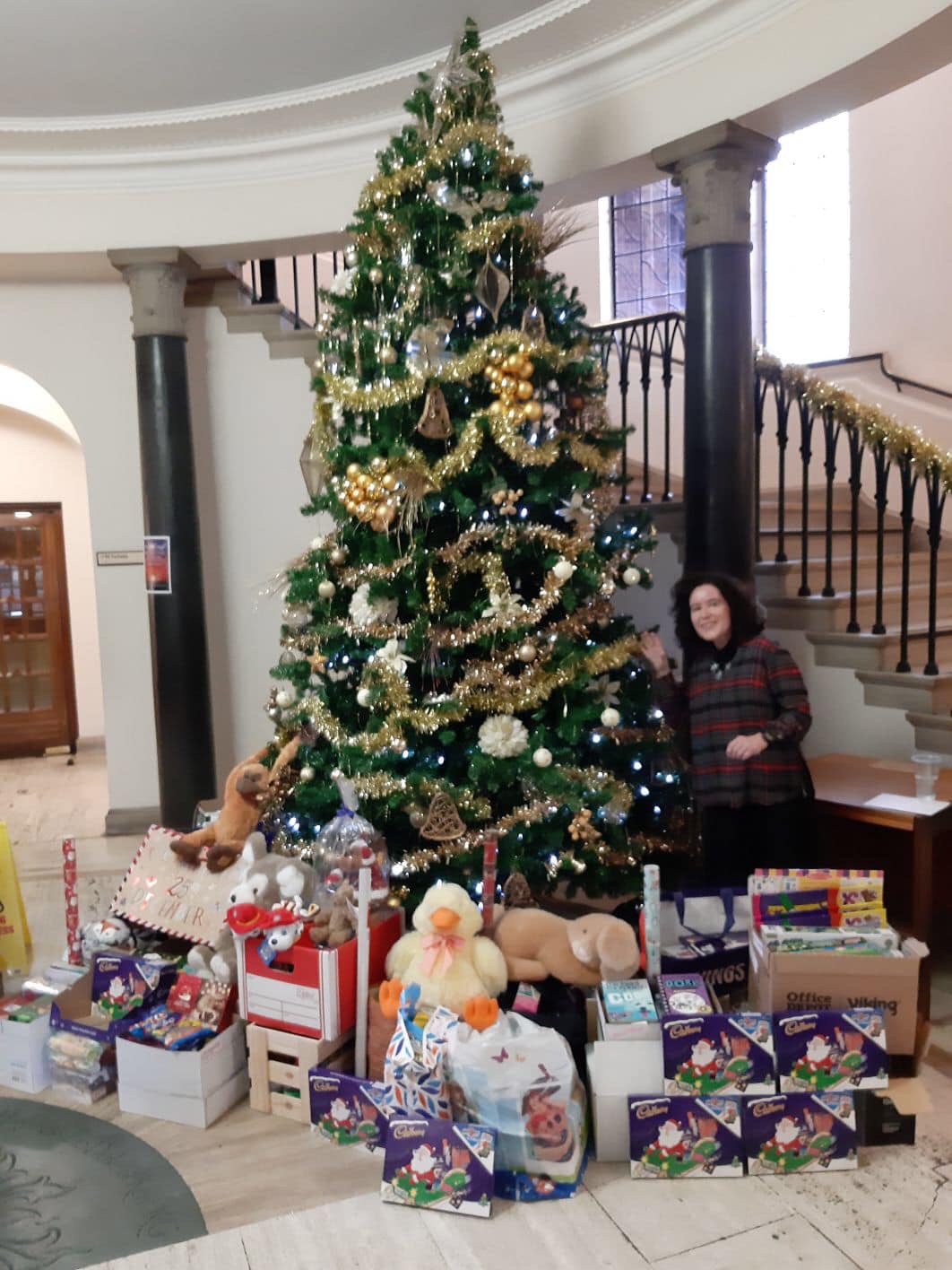 The Mayor of Dudley, Dudley MBC staff and councillors

We were once again fortunate that the Mayor, Dudley MBC staff and councillors again supported our appeal.  Special thanks to the Mayor, Cllr David Stanley and Maren Lilley, who organises the appeal across DMBC and the lovely staff, and councillors who helped this year. 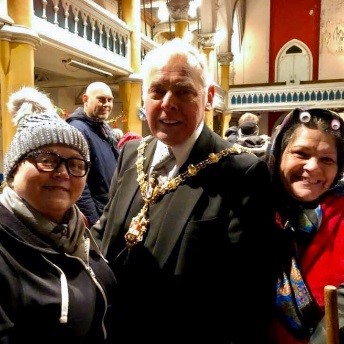 Michelle and Karen were kind enough to support us this year. They visited the grotto and made a special video which was very popular, with over 6000 views. You can watch the video on their Facebook page here: https://tinyurl.com/wh3sz66

Through their connections we were also able to channel some party presents to local foster children and a box of tennis balls was sent to the Greyhound Trust.

Daz and Craig who work for a well-known local media provider cycled an incredible 30K a day throughout November at a local leisure centre and raised a fabulous £675 in sponsorship, which they spent on toys for the appeal. Here they are unloading their van of goodies. 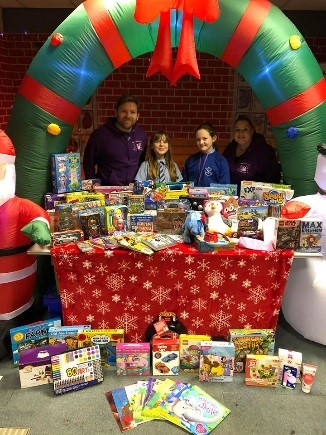 The children from this club have been supporting us for several years and each child chooses a toy to donate that they would like themselves to give to another child who may get nothing for Christmas.  They visit us in the grotto each year and we always take a photo as a souvenir of their visit. [Here are Dean, Alexa, Ellie and Carley when they dropped off their gifts] 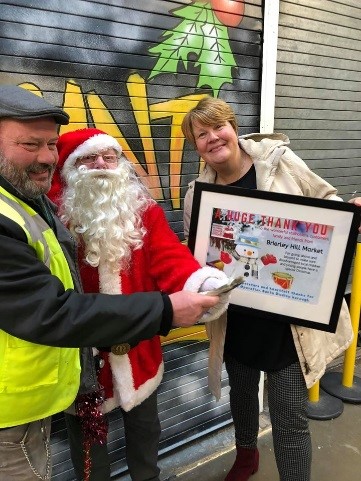 Special thanks to Santa for flying back from the North Pole especially to donate the money he raised at Christmas, in his grotto in Brierley Hill Market. Here he is presenting Eileen from Operation Santa with £350 to kick start Operation Santa 2020. Grateful thanks to Jason Keen, Malcolm Bridgwater and Steven Bridgwater for their efforts. So lovely that a local market and its traders want to make sure local kids don’t think Santa has forgotten them.

Geoff Hill was a long-term supporter of our Operation Santa appeal and Sue Hill, his wife has generously continued his legacy again this year, for which we are very appreciative.

Feedback from those we have supported 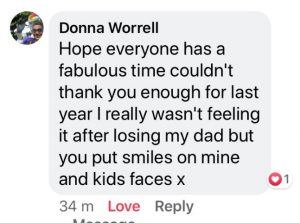 We had so many lovely people who have supported us this year and here is a full list is available here: https://wp.me/P1ZP0K-x

Every picture tells a story

Photos from this year’s Operation Santa are available here: