I was devastated to learn that Geoff Hill had passed away a few weeks ago.  He was a true gent and I first met him in 2000 when I started at Dudley CVS.  As I became involved with Operation Santa I saw more of him and grew to love this passion for making a difference, and his wonderful sense of humour. We had numerous photos together over the years and in later years, rather than photo shoots with the press, Sue and Geoff always came in to give me a sizeable cheque each year for Operation Santa and we had a lovely catch up over a coffee.

A founding member of the Hope Charity that used to fund the annual Toy Appeal and an ongoing supporter when the Hope Charity ceased.  Here’s to many happy memories of a wonderful man.  The giant cracker was an incredible year when we received 6082 donations and last year we reached a jaw-dropping 18776.  We could never have reached so many children who may think that Santa had forgotten them without Gentleman Geoff.  A very special thanks to Jayne and Steve Waltho for their support 🙂 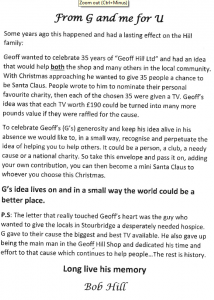 Follow us
Posted in BC Toy Appeal, Donations, Presents